Ordination in the Tibetan Buddhist Tradition

His Holiness the Dalai Lama feels that it is important to know that nuns and monks ordained in the Tibetan tradition follow the vows set forth in the Mulasarvastivadin school of monastic codes. The gelong/gelongma (bhikshu/bhikshuni--the fully ordained monk/nun) level are recorded in the Mulasarvastivadin school's Individual Liberation Sutras. Interspersed throughout their Tibetan translation is an easy to remember set of chantable verses summarising the gelong or gelongma vows. These versified mnemonics are known as the "Interleaved Summaries of the Vinaya Discours". 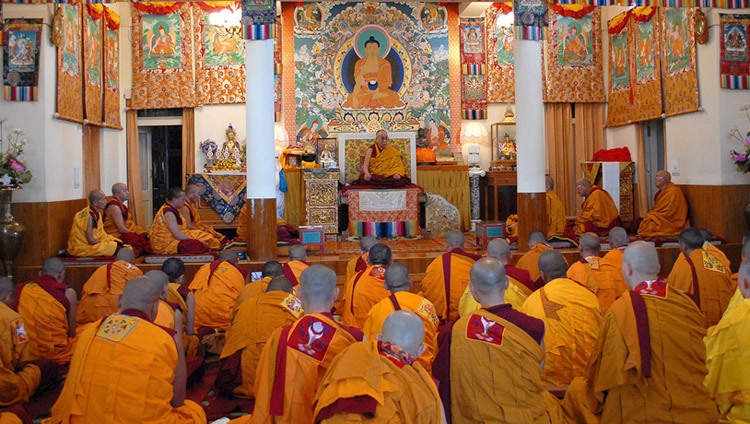 In 1973 His Holiness the Dalai Lama wrote the "Direct Instruction From Shakyamuni Buddha -- A Gelong's Training in Brief" (1), a vinaya text based on the Interleaved Summaries presenting the fully ordained monk's vows. In this commentary His Holiness comments on the 253 vows of a fully ordained monk according to the Mulasarvativadin school of Vinaya.

Mulasarvativadin school of Vinaya was brought to Tibet by the Indian Abbot Shantarakshita in the 8th century who visited there at the invitation of the Tibetan Monarch Trisong Deutsan. At the request of the Tibetans he founded the first monastic community by first ordaining seven young and promising Tibetans. Gradually monks more were ordained by him, thereby establishing the Buddhist monastic order of the Mulasarvastivadin system in Tibet. We are now in the 2554th year since the Buddha passed away beyond sorrow. Ever since the Buddhist monastic lineage of this tradition was established in Tibet it has continued unbroken despite great difficulties in the century following Udum Tsanpo's persecution of Buddhist monastics and Buddhists during his reign.
The getsuls/getsulmas (novice monks and nuns) keep vows similar to the fully ordained monks. All the eight different pratimoksha vows are meant for a whole life from and not just a part of one's life, except for the one-day fasting upavasa vows. Therefore, the motivation must be for the rest of one's life while taking the getsul, getsulma, and gelong ordinations.

The 253 vows of a fully ordained monk--these are the ones explicitly prescribed for the ordained persons by the Buddha himself in the vinaya scriptures--in the Mulasarvastivadin school of vinaya are broadly divided into five categories or classes with sets of ten, twenty and so forth as you can see below:

1. Emission of semen  2. lustfully making a physical contact  3. speaking words to do with sex  4. commending services  5. baseless accusation  6. subverting the lay folk  7. displeased with advice, and so forth.

Forfeiting downfalls, third set of ten: e.g. 1. retaining and 2. seeking out an alms bowl; 3. engaging a weaver to weave a cloth and 4. increasing the woven, 5. reclaiming a gift,  and so forth

Simple downfalls, fifth set of ten: e.g. 1. using water with creatures in it  2. standing near a place where lay men and women are preparing for a sex act, etc.

Simple downfalls, eighth set of ten: e.g. 1. going along a road in company of a thief  2. conferring full ordination on someone not yet twenty years, etc.

Misdeeds, first set of ten: arising from the wearing of robes: e.g. the misdeeds of not wearing the monastic shamtab (lower robe) round, wearing it hitched up high, knees not covered, hung loe, covering the ankles, stretching down on one side like an elephant trunk, top folded above navel, etc. Also, the misdeeds of wearing the upper robes not round, wearing it hitched up high and wearing it low.

Misdeeds, eighth set of three: to be performed; and ninth set of one: going: e.g. discharging urine, faeces, and so forth into water, etc.; and climbing tree above a man's height with necessity.
These are the two hundred fifty three infractions which a gelong must guard against. For the actual infractions to occur fourteen of these infractions require a gelongma (bhikshuni) as a factor. To novice monks and nuns the actual infractions don't occur but something similar to them occur.

In the Mulasarvastivadin vinaya tradition, like the Theravada tradition, we follow the rules of ordination such as taking vows not yet taken, the ways of guarding them without causing degeneration and the ways to restore them if they degenerate. The ordained monks and nuns study and practice vinaya; they take part in the bi-monthly confession and restoration ceremony, etc.

In order to ordain people, the Tibetan tradition strictly follows the prescribed ordination guidelines and procedures for the novice and fully ordained monastics. Monasticism is regarded with highest reverence as the foundation of the teaching of the Buddha. His Holiness the Dalai Lama says:

In particular the moral code of individual liberation is the essence of Buddha's teachings, such that it is said that wherever there is gelong, a holder of the Vinaya, there the teachings of Buddha abide and that place is not devoid of the Teacher himself.(2)

Lord Buddha himself says in the Vinaya Bases:
Wherever there is a gelong, a holder of the vinaya, that place is luminous; that place is illuminated. See that place as not devoid of me. I also abide unperturbed in that place.(3)

In order to keep morality pure the monastics must know these four doors through which infractions occur and close them off:

Morality is the foundation of Buddhadharma. It is essential to the trainings of higher concentration and higher wisdom. Therefore, it is important to guard morality to progress through the dharma path and reach the ultimate goal of enlightenment.

"If we go right to the very base and foundation of all the good qualities set out above, we come down just to morality. Therefore, the exceptional basis and foundation for fulfilling the twin purposes of yourself and others is the moral code of individual liberation in your continuum, please endeavour with every effort to maintain purely, unsoiled by the faults of the stains of misdemeanours or infractions."(4)